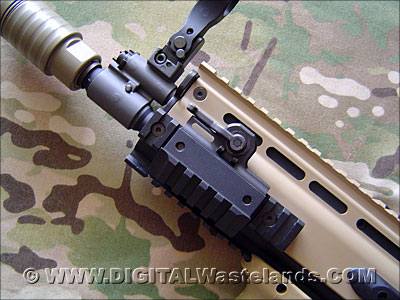 The G&P – Angled QD Mount is an all metal built, raile mount with a 45 degree angled rail. It's perfect for lights/lasers if you want an offset mount. I wouldn't suggest putting any sort of load on the rail though like a vertical grip or grenade launcher. 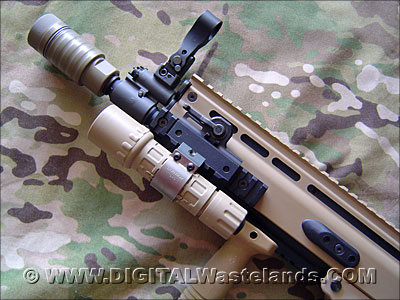 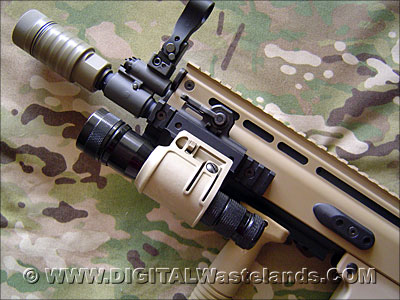 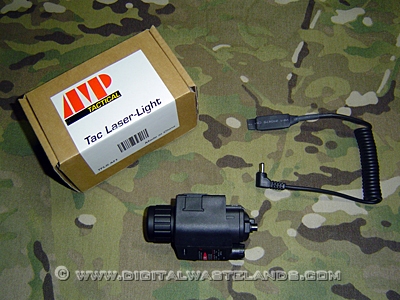 The AMP Tactical – Tac Laser-Light is a close copy of the ITI (Insight Technologies) M6 Light/Laser, but with some added features. It has both a Xenon tactical weapon light and Class IIIa laser in a single unit. 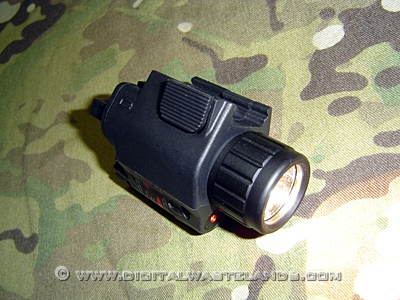 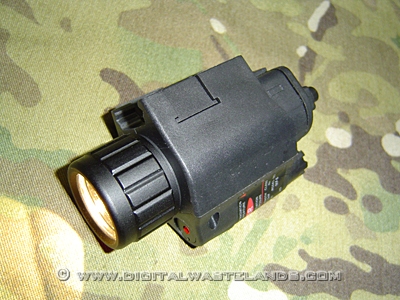 Even though the body is plastic, the build quality is solid. Xenon bulbs give off alot of heat and the plastic body keeps this unit cool. With batteries install the unit has good weight. 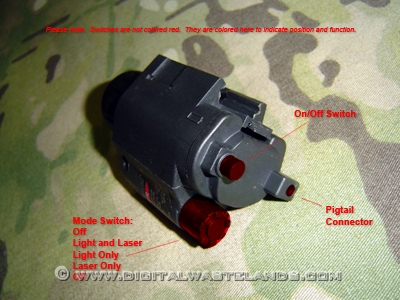 It has an constant On/Off switch on the left rear of the unit. This switch is automatically disabled when the momentary On/Off coiled remote pigtail switch is attached. The bottom rear of the unit is the Mode Switch. When rotated it lets you select, OFF – LIGHT/LASER – LIGHT ONLY – LASER ONLY – OFF. There are also windage and elevation allen screws on the bottom of the unit to adjust the laser. 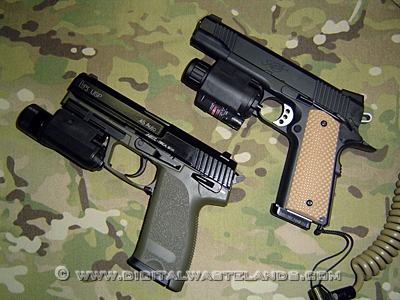 As seen above, the unit is compact in size, but with almost the same power and added laser compared to the G&P M3 Weapon Light. 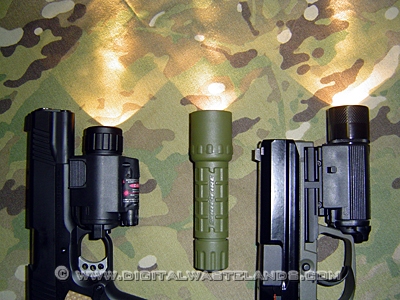 The AMP Tactical – Tac Laser-Light kicks off?a littel less?Lumens as a real Surefire 6p (65 Lumens). Not sure on battery life so far with the added use of the laser though. Will post those finding later. 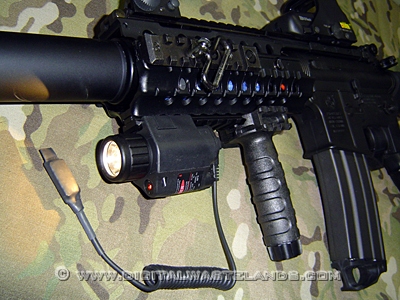 The included coiled remote pigtail switch is a great added feature that the real ITI M6 doesn't have. This lets you mount the unit on any railed weapon giving you the freedom to use the switch where it's most comfortable.

Tested in indoor range this morning. Tested mounted on:

The Light/Laser unit held up well. Laser position did not move due to recoil, always stayed on target. Light was not effected by recoil. Showed no signs of dimming or any electrical problems during firings.? There are no noticeable sings of wear when compared this unit to a "virgin" unit. Gun powder residue needs to be cleaned out though ;(

Bulb burned out ;( Laser works fine.? Bulb bunred out due to me placing the unit in a pouch adn it rested on the power switch. Not a standard bulb so looking for replacement.

Ended up taking it back to AEX and they exchanged it for a new unit. Got lucky.

With the assistance of AEX… I finally bit the bullet… Brought home the EOTech 511.A65 Holographic Weapon Sight. 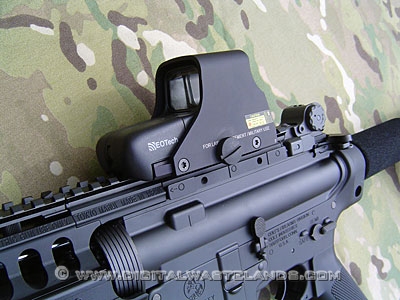 So the big questions are:

Q: Is it worth $350.00+???
A: If you can afford it, then yes. But for airsoft players with limited budgets, the Chinese copy aimpoints and redots work just fine.

Q: Are the optics that much better then a sub $100.00 reddot?
A: Yes, build wise this things rugged and was built to take a beating. If the lens gets damaged, the holographic dot will try and work on a non damaged portion of the lens. It's waterproof and since it was built for real steel rifles, very shock proof. The holographic dot is drawn by a laser against a holographic coated lense.  Most other red dot systems use led's reflecting on a lense.  The holographic image is extremly bright shows up easily in direct sunlight with 20 levels of adjustment. 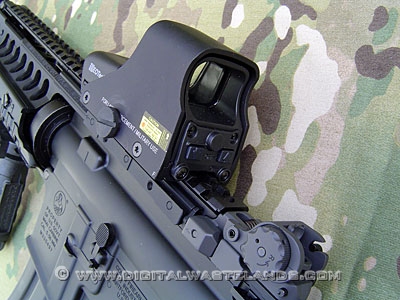 I went with the N size battery model for the shorter looks. The AA version while physically longer, has a much longer battery life. 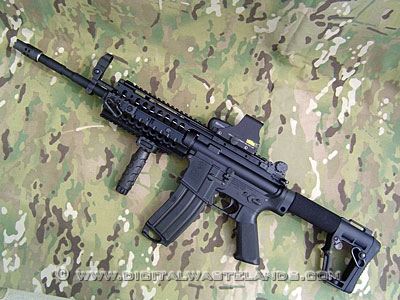 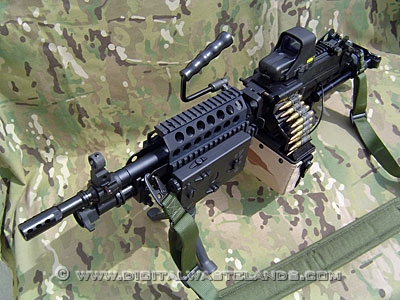 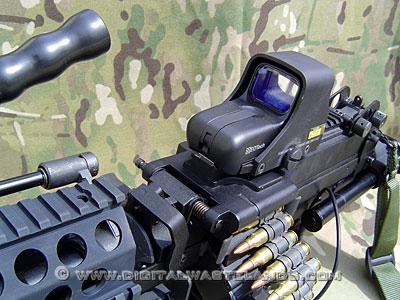 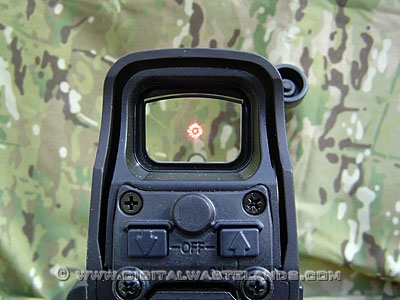 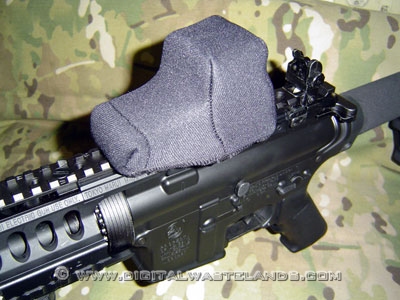 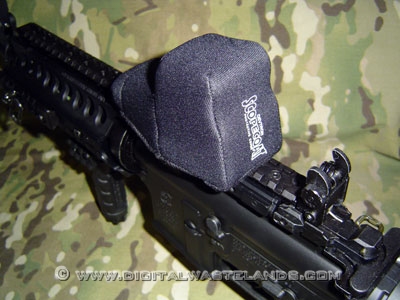 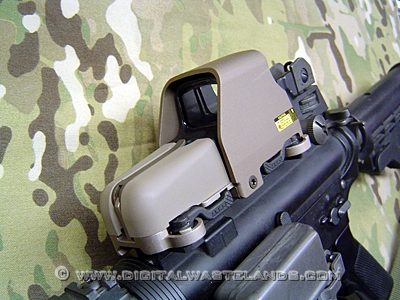 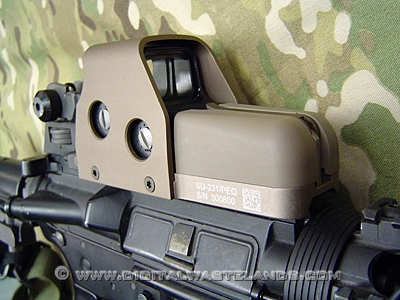 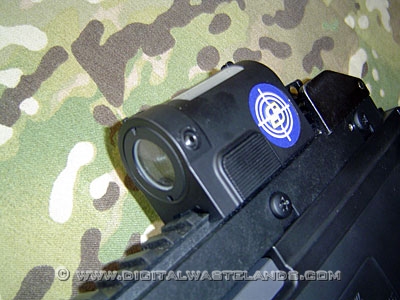 I wanted to get a compact red dot that sat low profile enough to use the iron sight on my G36c. The Star S-Point fille dthe requirement.

The Star S-Point is a clone of the Zeiss Z-Point sight. Physically it's a good copy. Functionally there's room for improvement even among the many red dot copies out there.

There is only 1 brightness setting which is either on or off, adn the body seem sto be mostly made of plastic. I'm also a but worried about the durability of the spring loaded rail clamp and even the sigle button switch. 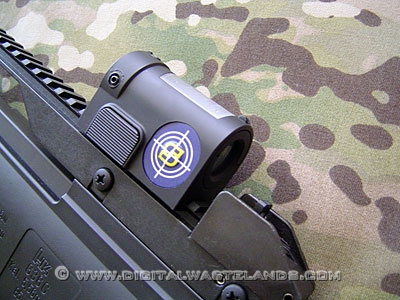 Overall, get this sight for looks alone. Functionality wise, a Guarder or King Arms Aimpoint clone at least has variable brightness. 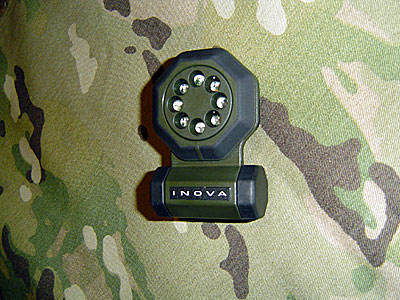 The Inova 24/7 is a multipurpose, high output tactical LED system. This is a modern replacement to those G.I. Style Angle Head Flashlight we all once had. 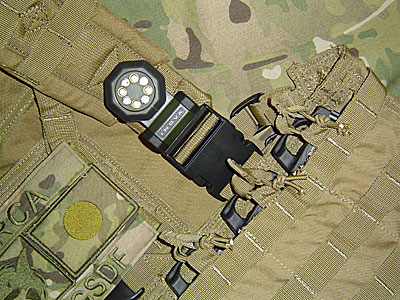 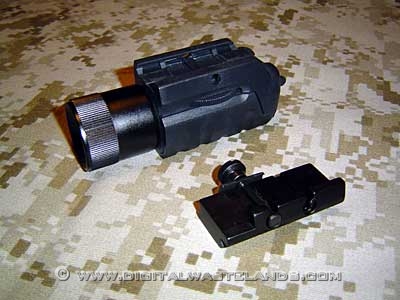 I own the G&P M3 and G&G GM3 II Tactical Weapon Light Systems and must say this Maruzen MT-1 is the most adaptable. The MT-1 uses a "screw on" attachment to secure the weapon light instead of a spring clip type on the previously mentioned lights. No more broken spring clips on this light.

The MT-1 has an ambidextrious on/off switch (Unlike the G&G GM3) but this unit does not seem to have "Constant On". The G&P M3 and real steel Insight M3 have the best designed switches of an M3 or clone IMHO. 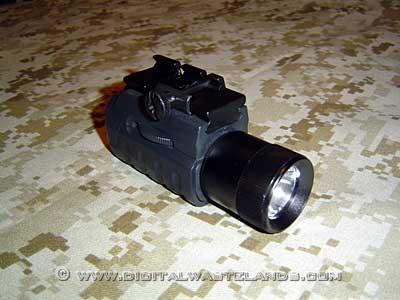 The MT-1 Also has a second 20mm Rail Attachment that will adapt this light to any rail mount system. 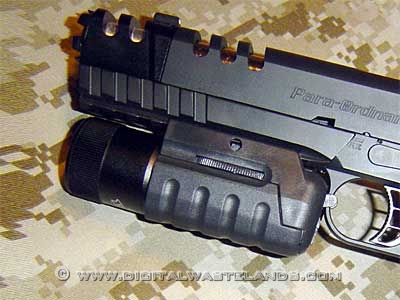 The MT-1 is also a bit larger then the other M3 clones and I feel it looks better on large frame guns. While an M3 clone looks great on a Glock, I think it's a bit small on an MK23 or 1911 type. The MT-1 is a nice size step between the other M3 and an MK23 LAM.

END_OF_DOCUMENT_TOKEN_TO_BE_REPLACED 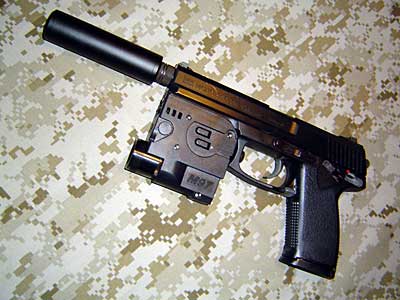 This LAM unit by Wolf sports both a tactical light and laser and is designed for use on any MK23 gun. The tactical light is a Surefire P60 clone and the unit uses 2 CR123A batteries that most tac light use. 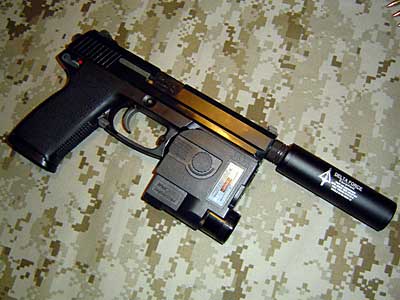 The unit is mostly plastic except for the tac light bulb housing. The light is very bright as it shoudl be. It's very easy to install on an MK23 and the $88.00 price makes it the most affordable LAM with laser and tac light available for any hand gun.

One big downside for me though… There are 2 seperate switches to turn the light or laser on. These are both pressure switches on the left side of the LAM. There is no "constant on" function to these switches and the placement of the switches makes holding the gun adn operating the swithches a bit awkward. It also is taller the the stock Marui LAM and will not fit in a KSC MK23 Holster.

This was my 2nd attempt to use a larger battery on my M4 R.I.S. This unit is mostly plastic and had the ICS Laser and remote pressure switch attached. I added a GRS 9.6v 1700Mah battery to the setup and it did the job of adding a larger capacuty battery and accomodate my M203. 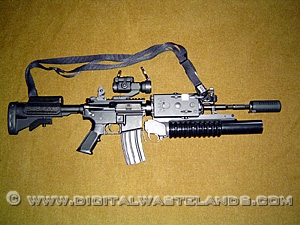 This battery box is about 3 times wider then the stock M4 R.I.S. battery pack and does add alot more weight to the front of the gun (Not good for my setup with an M203 already on there. ICS built this mostly out of plastic which includes the RIS attachment part which may end up cracking if torqued down too much. The laser worked as advertised, I just never used the laser in a skirmish. It was a little tough to get it aligned but I eventually was able to.

Overall it does its' job adding a larger battery to an M4 with collapsible stock. But the laser isn't really needed cept to show off to friends.