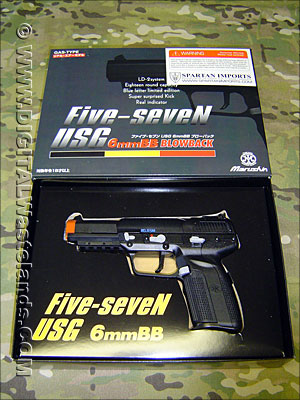 Since my first AEG, an FN -P90, I’ve been interested in the 5.7x28mm round and anything that could be related. The FN Five-Seven (Named after the round, duh), is the first semi auto pistol to take this round. Marushin created the first replica of the USG variant and did quite a nice job appearance wise. 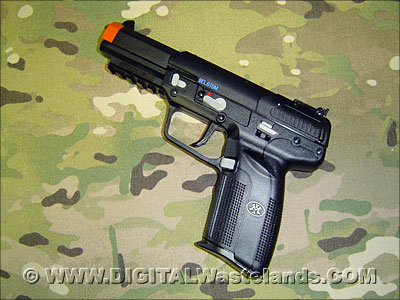 Unfortunately, a decent airsoft GBB can’t only rely on appearances alone… The overall build of this gun is plastic. Only notable areas of metal build are the magazine, outer barrel and firing mechanism parts (linkages, springs, etc). The overall weight of the USG is around 1.6 lbs, which most of that weight is in the magazine. The FN Herstal name was removed by "milling" out the plastic as seen in the above pic. 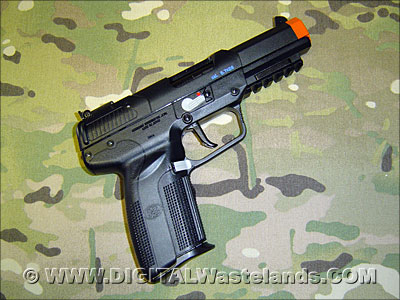 I opted to go with the 6mm version, since 6mm is closer to the size of the 5.7mm cartridge. The 6mm carries 18 rounds, the 8mm holds only 10 rounds and the real Five-Seven holds 20 rounds. In the FPS results below you’ll see that the 8mm has pretty much the same if not better FPS then the 6mm but if you take into account the weight and mass of an 8mm bb over a 6mm you can see the 8mm gun was designed to be more powerful. 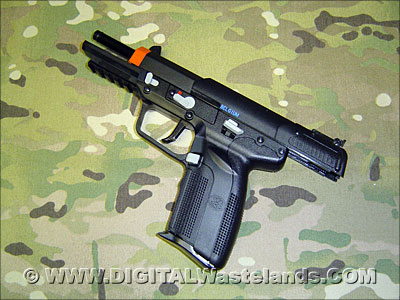 Some people saying that this Marushin product is a U.S. Import Version. While yes, technically if you live in the U.S. and you buy anything imported it can be considered a U.S. import version. The Marushin Five-Seven USG that is being distributed by Spartan Imports has NOT been modified/reinforced, like the U.S. import Versions of the Marushin M500, M1 Garand and M2 Carbine for higher pressure gas use. 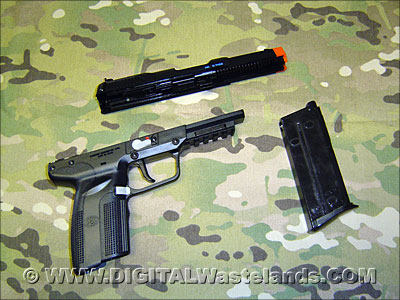 Take down is EXTREMELY easy. Unfortunately the hopup adjustment allen screw is hard to reach and does require removal of the barrel from slide to adjust.

Gas Usage Advisory!
Any Japanese Manufactured, Gas Blow Back Pistols are built to take 134agas, which is weaker then Green Gas. From my personal experience I found that Tokyo Marui, Western Arms and KSC GBB’s can handle the more powerful Green Gas without problems. But for most other Japanese GBB’s the use of the weaker 134a will insure a long, life. Use higher pressure gases at your own risk!

That being said… Of course I tested both 6mm and 8mm version on both 134a and Green Gas. Average FPS results below.

Started taking the orange tip off the slide this morning, using the DW, Goof Off technique. Found out the plastic slide isn’t made of the best quality because Goof Off started to melt the plastic of slide where the paint was being removed from.

Looking more closely into the plastic slide itself, it’s a 2 piece slide. There was speculation at one time that the plastic slide was metal reinforced internally. It is 100% not. The slide has an internal plastic frame. 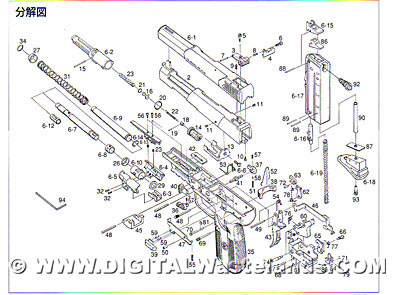 There is also a feature that Marushin calls the "Real Indicator". It is an indicator at the rear of the slid that tells you if the internal hammer is cocked. Unfortunately it’s extremely hard to tell what position it’s in due to the fact its the same color as the slide and recessed in the slide. Diagram below shows how it works, it’s just not as visible as the diagram portrays. 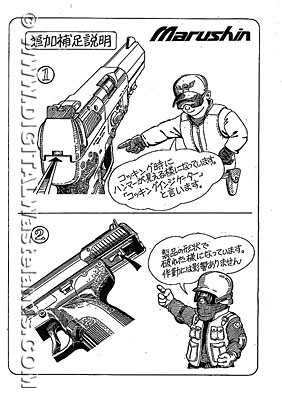 A curiosity of the 8mm Five-Seven is the use of a "bent" or "flatline" style of inner barrel in conjunction with a traditional hopup allen screw setup. That bend adding friction to the top of the bb, thus adding more backspin. The 6mm version does not have this bent inner barrel though, but has 2 hopup adjustment screws. Looking into more details regarding this. 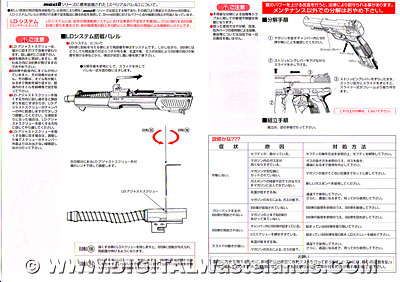 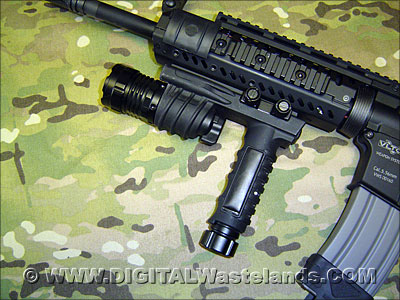 The Rico Alpha 9 Tactical light has been available for a few years now. Many reviews already exist but the real draw for me was how popular the Rico Alpha 9 has become in the Real Steel Gun community. I have experience first hand how durable these are when mounted to AR-15’s. The manual states they will work on guns up to 7.62×51. 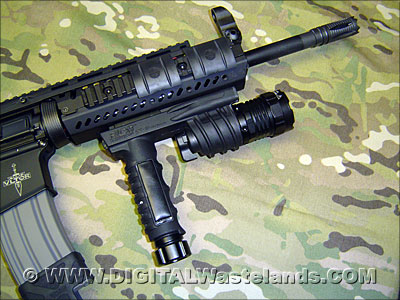 This one is the newest generation of Alpha 9 that features a new pressure pad with guard and a paddle switch.

The Rico Alpha 9 is constructed with a high quality polymer body and aluminum skeletal frame. The light is impact resistant from a 2 meter drop and is water resistant. It has a super strong 3mm poly-carbonate lens and full aluminum lamp housing with striker flashlight head and butt cap. Powered by three CR123A batteries, the 250 lumen bulb will deliver blinding illumination. The small LED search lights are functional and provide enough light to search a small room without giving up your position with the main light. 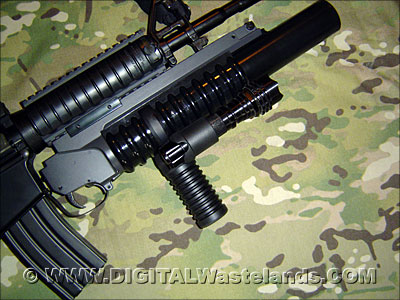 The Pro Arms – M203 CQB Grip w/Light Mount is a replica of one of RM Equipment’s products called the M203Grip. The Pro-Arms replica uses a lateral pressure attachment system and attaches to 1 of the M203’s fore grip ribs very securely.

Purchased initially when the site opened in Oct 2007.

This is a mainland China retailer and ALL prices on the site include International shipping. Ordered on Oct 2nd, shipment received Oct 5th. Ordered a couple of MC Combat Shirts, MC Range Vest, MC Waist Pack and M900A (Have to equip the posse for Halloween @ Disneyworld). Quality is Chinese copy level, so on par for what you are paying for.

2 weeks later I got an email from Ebaybanned.com stating they had a new version of the MC Combat shirt shortly after my first order with them shipped. It was in their usual Chinglish, so I took it as a little marketing email on their end. Turns out the email was stating they were going to send me the new version of the MC Combat Shirt. The 1st generation had no velcro on the sleeves for patches. 2nd generation does and uses different material for the torso of the shirt. I was pleasantly surprised when I received 2 replacement shirts today at no charge and not by any request on my end.

Around Aug 2008, Ebaybanned did a little restructuring and hired a few more people. Their turn around times stretched out to 3-4 weeks. Turn around times seem to be getting better in 2009. Averaging about 2 weeks now.

Overall, I’ve placed 20+ orders to date. Just be patient and it’s all good.