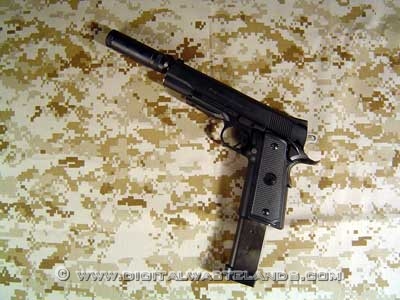 Well… suprisingly with the amount of airsoft I own, this is my first Western Arms gun. I must say for quality, weight, appearance and performance, it lives up to what all WA owners say. These guns are top rate replicas and top rate performers,

This specific gun is the Prokiller Para-Ordnance 14-45 Combat which includes the following:

NOTE!!! Even though this gun is called a Prokiller and it ships with the High Cap mag, it is NOT select fire. This replica is semi auto ONLY (Which I found out after purchase, but that disappointment was countered by it stock fps performance. See Below)

Quality of this replica is top notch. Other then the plastic slide it looks and weighs almost the same as it's unloaded, real steel counter part. The only gripe I do have is a little magazine wobble, meaning there's a little space in the magwell.

Performance of this gun , out of the box, is really good. This is my first WA 1911 type of gun and I had forgotten 1911's were Single Action, but yet another area where WA made a great reproduction. With Green Gas, fps results as follows:

I figure the much longer inner barrel is giving the added power, but it is more then I expected. I have a new Hogue grip on order and so far that is the only upgrade I'm planning on this gun. 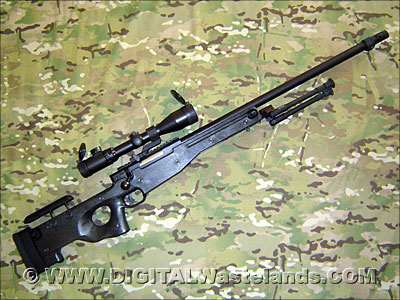 Even though I also own 2 Tanaka M700's (AICS and the PSS), which hands down out perform a spring sniper like this Type96, this specific spring sniper I still feel is worth holding onto. Even though it's over 3 years old, it still shoots extremely consistently. While most spring snipers make a "Boing" sound when shot, my Type 96 has a wicked sounding "Crack" when fired. This is still an excellent airsoft sniping platform, but still no match for the Tanaka M700's.

OK so I hate the AWPer's in CS and I don't like to be the AWPer, but I do love the Accuracy International design (Thumb Hole + Large Caliber = Sexah). The Maruzen packaging was clean and secure as the other APS2 versions. Features include:

This is Maruzens latest version of the APS series and I'm quite impressed with the features. The new features for the price, compared to the ASP2EX are impressive and the design and build of this rifle is excellent (I hope Tanaka gets a hint from this).

I wanted to put on my Versapod Bipod temporarily until the Maruzen bipod ships but it wouldn't sit correctly due to interference from the built on bipod adapter. So I mounted my Harris style bipod for now. 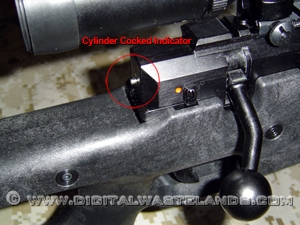 The Cocking Indicator is a nice addition. Visually or by feel you can check to see if your ready to fire. 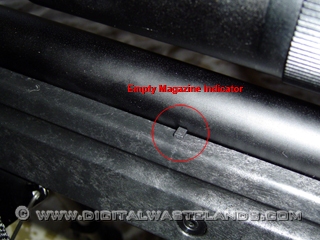 Now this is a nice addition. I may have to paint the sides red though. You really have to look at it to see it. Also of note, New Magazines that have a metal lower section. Not the all plastic ASP2 ones. 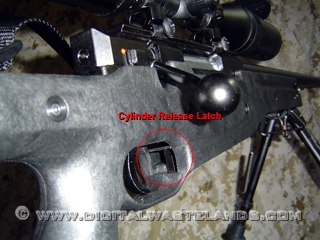 Another great feature. Just push down on this latch and it enables the entire cylinder to be removed. When upgraded cylinder and bolts are available this will enable a person to carry more then 1 cylinder for either different fps, or as a backup. So instead of upgrading the existing cylinder I think I'm going to wait for full cylinder upgraded to become available and carry a few. 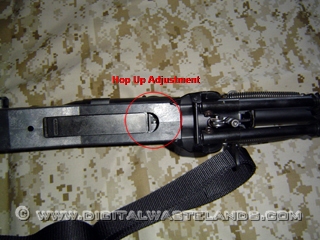 Hop Up Adjustment!!! Being an owner of an APS2SV, the ability to adjust hopup was something I always wanted in an APS. Although you need and allen wrench to adjust unlike the Tanaka M700, at least the option for adjusting hopup exists now.

I was amazed to see the consistency of results. The numbers didn't deviate as much as my APS2SV. 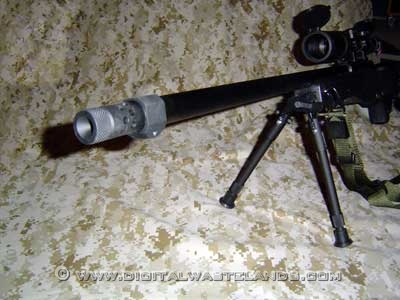 Over all it's a very impressive sniper rifle if just for the design alone. Will be adding more info later as the balance of accessories and upgrades come in. 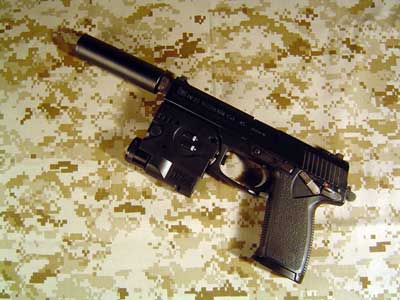 Well I ended up stripping the Powder Coating and wet painting the slide with Tamiya Acrylic. The powder coating was just too thick to be used on a slide and barrel. But after abotu 3 coats of wet paint, it came out great and I need to take Guinness' advise on taking pics

. I'll post better pics later. The metal slide functions as it should. Decreased my ROF about half so may need to get an upgraded valve. 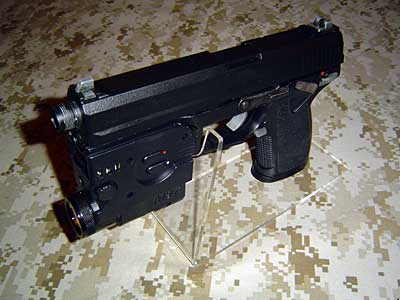 Luckily my parent's own a powder coating factory, so I put my bare aluminum slide on the line today after carefully masking the slide grooves.

Why Powder Coat? Outside of the fact for me it's free, powder coating is a very durable way to coat metal (So durable it's a biyatch to sand!). Very scratch and ding resistant. The process involves the powder paint and a 400degree oven, so anything that will melt needs to be stripped.

My biggest concern with the slide was that powder coating is alot thicker then regular liquid paint, so I was concerned about all the TM. The picture doesn't show it well (I'm going to use Guinness' picture taking techniques during the day sometime) but the TM came out fine. The biggest prob was due to the base metal used on the Zeke slide. I was a very pourus aluminum casting adn outgassed during hte process, which reulted in the texture effect on the slide. I dunno now, I kinda like it

But I'll probably strip the slide and barrel tommorow adn try some other paintng technique next. 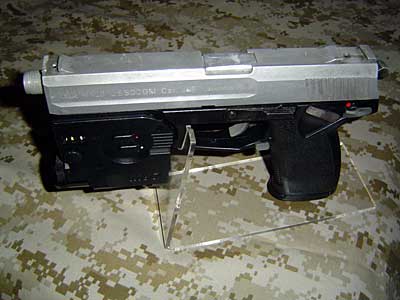 I scored a Zeke Metal Slide and Barrel for $50.00. The only problem with it was the finish was wearing off. Above are pics of my initial cleaning for the parts. I will probably be sand blasting and either powder coating (the best powder coating shop – Gemtech

) or painting the slide and barrel.. Now I just gotta make up my mind what to paint it… Marpat??? 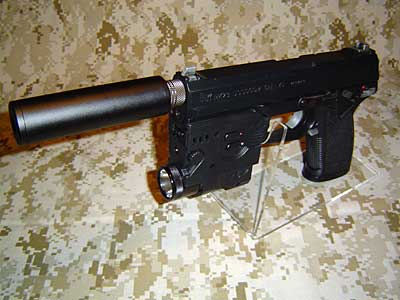 I came across an ad on AirsoftPlayers.com for a KSC MK23 Heavyweight gun in need of repair for $75.00, so I just couldn't resist taking a look at it for the price and seeing how far I could get fixing it. 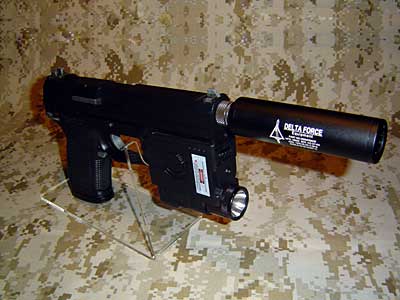 When I recieved the gun it looked as if it had been submerged in water or something since there was rust on all the metal parts. Luckily a little dilluted pholic acid and some Gun Bluing I have for my Real Steel guns took care of that. The gun fired, but the trigger stuck and you were lucky to get the hammer to lock and slide to return back to position. To top all that the magazine did not release or sit properly in the gun. 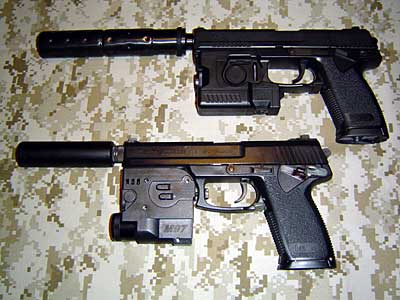 I lucked out and purchased 2 parts that fixed the guns operations:

And everything works great now!!! I don't think i even needed the spring set but it really gives the gun a nice crisp return on the slide.

With the success of the base guns fixes, I've added the following:

So far everythigns great on the gun. It's really heavy, loud report, crisp action and to top all that it shoots well too!