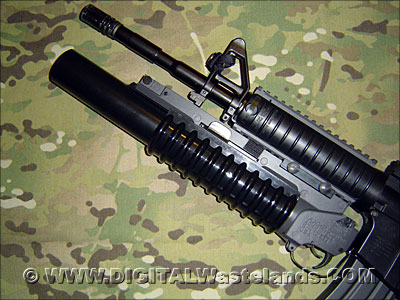 The Sun Project – M203 Grenade Launcher, R.I.S. version is a replica based on the U.S. Military's M203. Real steel info here. This version is different from the normal M203 in that this attaches to any R.I.S. rail.

It's a decent build and when I purchased it, was the only M203 available for airsoft. It is breech loaded and take the standard 40mm airsoft grenade. The barrel and front grip are plastic, and with some of the newer more powerful grenades, the plastic barrel sometimes wan't to follow the bb's when fired. 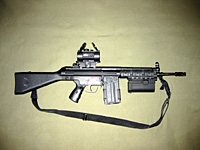 The CAW Mini Launcher mounted on my Modified MC-51

Even though it's called a mini-launcher it is an impressive grenade launcher that will attach to almost any type of rail system. It is all metal and adds some weight to the rifle. It is very simple in design which is a plus out in the field. Compared to a stock M203 type launcher it would be about 1/4 the length, but will fire all airsoft 40mm grenades. 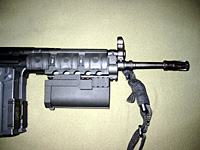 The grenade i use are also made by CAW and are gas operated. The one I have are teh 6mm and 8mm versions which you can pack with 24 bbs and fire all 24 bbs at one at over 300fps. It's truly impressive to hear the bang and see the volley of bb's travle towards your target. In CQB (Close Quarters Combat) I would not want to be on the receiving end of one of these babies. 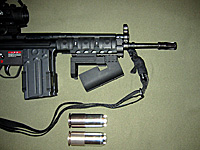 The CAW Mini Launcher with 6mm and 8mm Grenades

The simplicity of the CAW Mini Launcher makes loading and unloading of the grenade cartridges easy and fast. 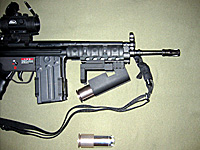 Some newer nades made by Madbull, CA or other Chinese mfgs, Have a hard time working with this launcher due to their harder piston springs.