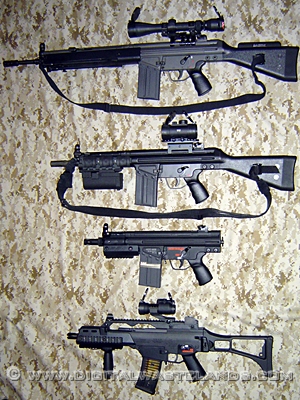 As you can see by the above pic I have a few G3 class rifles and I really like them. I wish I had an MP5 just to take this pic, but I put my G36c in the pic since it's grip is simular to an MP5. In the real steel world I prefer the 7.62 round over a 5.56 or handgun round so that may be why I prefer G3's. But I do prefer the larger frame of the G3 class.

The G3 SAS is a combination of a G3 + MP5K. In this TM rendition, you see we have the MP5k Front End, Cocking Tube, Claw Type Barrel Attachment, Quick Detach Flash Hider, G3 End Cap with Sling Attachment and 500 round High Cap Magazine. Some updated improvements to the TM G3 series include: G3 Trademarks, an EG1000 motor (Will confirm on any gearbox updates from the older TM G3's soon) and Navy Markings on the Selector. 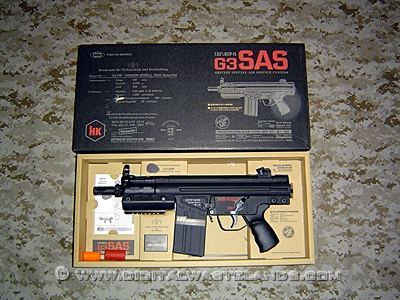 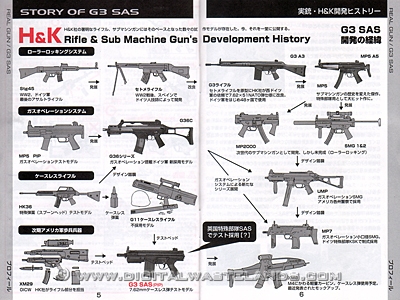 As far as I can tell, there is no "REAL" counterpart to this TM G3 SAS and from a real standpoint I think it would be a hella uncontrollable gun w/o a stock. I guess it could exist, but not in TM's form. The MP5K Cocking Handle and Tube only would chamber a 9mm size bullet an not work with a 7.62 round. But TM went through alot of trouble trying to justify this as a prototype gun like the G11. This model is supposed to shoot a 7.62 HITP Flechette round. (Still doesn't solve the short pull on the cocking handle). But above pic is just one section in the TM G3SAS manual that tries to justify the G3SAS's existence. (I'm not sure why they relate the G3SAS to the OICW since the OICW uses a G36 for the rifle portion). 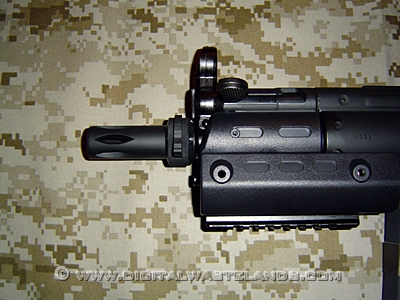 The front end is very MP5K looking. It has a 3 Claw Muzzle Adapter w/ 14mm Negative thread, Thread Protector, QD Type Flash Suppressor and MP5K Cocking Handle (Pulling the Cocking Handle will open the Shell Ejector Port to give access to the Hop Up Dial). 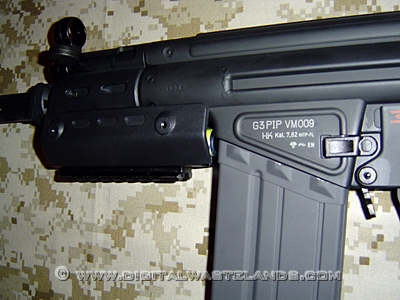 New to the G3 series by TM are HK Trademarks and Navy Trigger Group Markings!!! They Selector Switch also feels less "mushy" then past G3's and because of how short the G3SAS is it feels very solid with no barrel wobble or fore grip squeaking (G3 owners know what I'm talking about). And on the end it a G3 end cap with an MP5K type of sling swivel. 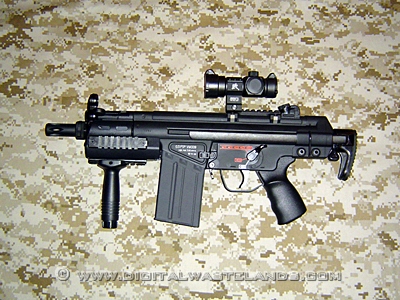 If you seen my other airsoft guns you can tell I hate to leave them stock, and luckily I had a bunch of extra parts I had purchased for my other G3's but never used them. So I got to make this Frankenstein of a gun a little more Frankenstein'd

So far, added the following: 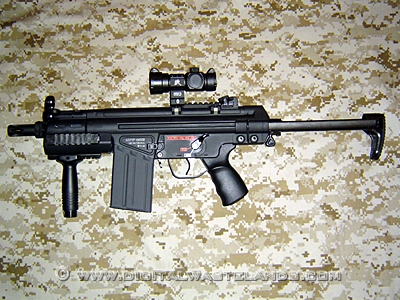 Well even thought this is a sub machine gun, I just had to put something to shoulder this when fired. I guess it's my past training that makes it feel weird to me to aim and fire w/o a stock… If I could hold an SMG like a pistol then I would probably not put the stock on, but I either look silly holding the gun

With the addition of the EG1000 motor to the G3SAS the ROF is on par with any other recent TM gun. You and hear and see the difference between an older G3 and this one. I'm not yet sure if any other internal upgrade were made from the older G3's at this time.

I don't think I'll be upgrading anything internally on this gun because I don't want some weird battery hack. I dunno we shall see 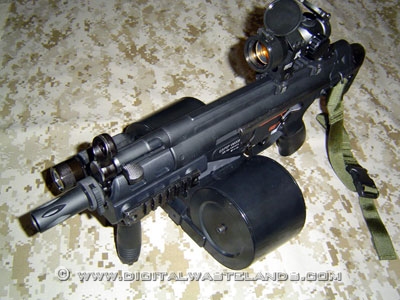 Since I read and saw the outstanding results of the Tanaka Gas Powered Mauser, I have been waiting for them to come out with a modern form of the rifle, and they just released the Tanaka Model 700 Police Rifle so I had to get one. I also own a Maruzen APS2/SV which had a gas cylinder upgrade (Which recently broke… Classic Army…. Grrr). And although I would don't want to make direct comparisons I think it's fair to say most airsofters have seen/fired/own and APS2 series. So I will make brief comparisons based on that. Also please keep in mind I have had the rifle for only 1 day so far

So let's get some comparisons outta the way here. The Tanaka M700 and APS2/SV weigh about the same. But I noticed the stock on the M700 is much wider near the trigger. Maybe I'm just used to the APS2 type of stock in that I feel it's much easier to carry and handle. The M700's bolt is like that of a real steel bolt rifle in that the bolt slides back very easily. My APS2 with or with out Gas Cylinder has spring resistance on drawing the bolt back and depending on how hard you have to pull it back may pull you off target. The M700's hop up is very easy to adjust with a large dial to the front of the bolt opening on the scope/sight mount. The butt stock is not adjustable on the M700, but the manual has a diagram of an adjustable butt stock. The APS2 has spacers on the butt stock. The build quality of the M700 seems looser then the APS2. You feel the magazine move when you cycle the bolt forward.

The M700 come with removable and adjustable iron sights. The rear sight uses the built on weaver mount, so you have a choice of either iron sights or scope.

Tanaka M700 Close up of Bolt and Forward Hop Up dial

So how does it perform? Chrono Results below, but I must say it's great to have a sniper type rifle that will sit on target because of the ease of drawing the bolt. The gas system is great and I was able to fire about 40 rounds per 1 fill. The easily adjustable hopup is great too.

In closing I feel this is a great Sniper Bolt rifle for the price. It gives great performance out of the box. I hope to see some 3rd party accessories, but judging by the Tanaka Mauser, I'm not going to hold my breath.

Another great review of the M700 by Hammermods is here.