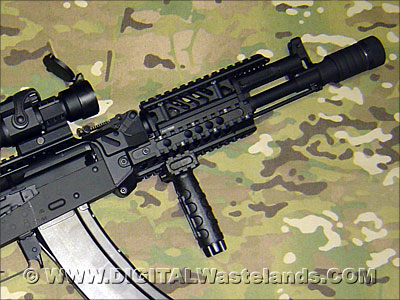 The King Arms – X-47 AK Rail System is an all aluminum rail system which is a replica of the TDI rail system used on BHI SOPMOD AK series. I intalled this on my AK74 SOPMOD project. 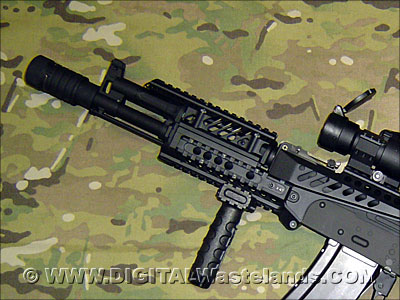 The King Arms X-47 is a CNC machined aluminum rail system. It has full X-47 markings and shipped with TDI replica rail covers. It is lighter in weight then my First Factory X47 Rail but is very comparable in buidl quality.There were some slgiht fitting issues, but they easily worked itself out. 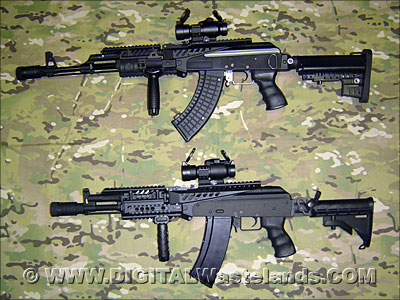 These are the Oakley – Flak Jacket Boots in Bark (Brown). These are in the Oakley’s Tactical Field Gear line which is different from Oakley’s S.I. (Standard Issue) Military Line. 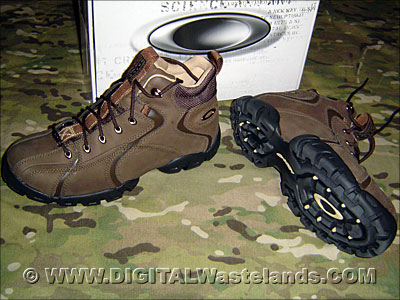 I decided on getting the Flak Jackets since I was also looking at the Merrel Sawtooth Boots, for general hiking applications. The Flak Jackets are a nice consumer hybrid of the Oakley S.I. line. Oakley’s propganda as follows:

Most boots are fine for weekend warriors. When we designed FLAK JACKET?, we utilized innovations developed specifically for the armed forces. Tactical-to-practical includes breathable waterproofing and resilient shock absorption in a lightweight athletic design. FLAK JACKET? is aggressive technology in civilian trim that travels well in casual territory. 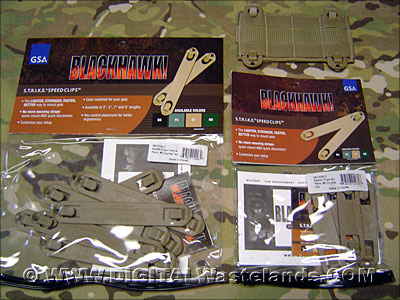 I first came across these at Shotshow 2007 and noticed they were finally on sale towards the end of 2007. I decided to get a couple of diferent sizes and see how well they worked out. I bought the 3 width and 5 width sizes, since they work with most of my gear. These clips come in 3,5,7 and 9 width sizes, in colors; Black, Coyote Tan, Olive Drab and Foliage Green. 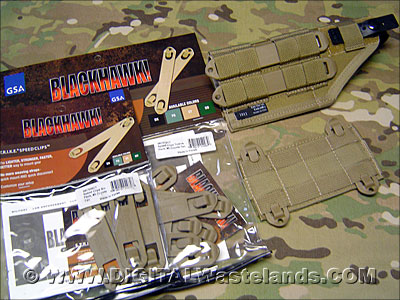 Speed Clips are made of a modern carbon-fiber polymer material that is strong, flexible and durable. These are the most versatile new pieces of MOLLE hardware available.?Developed by BlackHawk’s R&D staff, these clips quickly mount or disconnect pouches and other gear quickly and efficiently – no more tedious weaving of bulky straps or hesitation at rearranging your kit for better ergonomics.?These clips make that task easy. Tested in combat, they have proven to be both reliable and secure.

How the Speed Clip works:

If you have a pouch that has a MOLLE strap, you can either cut the strap off or tuck it behind the Speed Clip.

Click?Here To See The Speed Clips In Action. 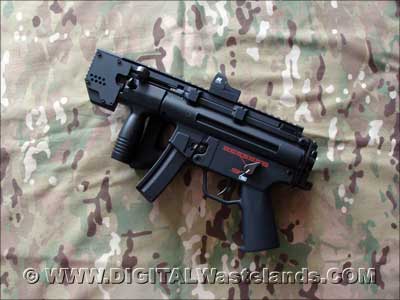 I have already built this mod for a friend of mine on a regular TM MP5K. And while I was thinking of building a Swordfish modded MP5, I remembered how much I liked the MP5K form factor. This Sword Devil is based on the Tokyo Marui MP5K-PDW, which adds a side folding stock to the MP5K. Parts included so far are: 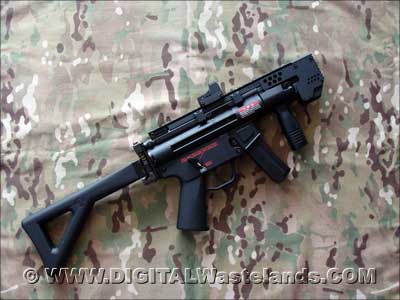 I’ve never been a big fan of airsoft MP5’s, which is why you’ll only see a few in my collection. But I’ve always liked the First Factory swordfish mod from a design standpoint.

There are a few modification you need to apply to an MP5K to be able to use the First Factory – Swordfish Frontend. Mods as follows: 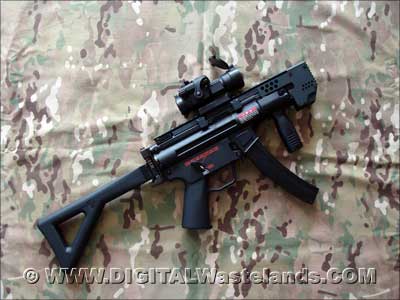 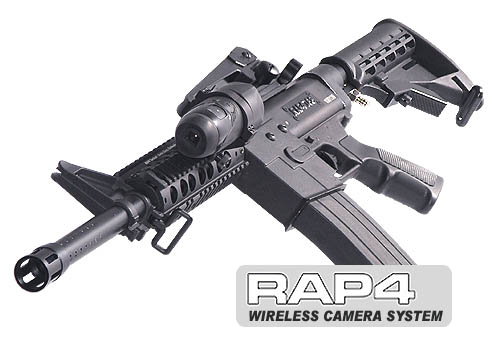 The rap4.com guys were kind enough to send over 1 of their Land Warrior System Wireless Camera systems (LWSC).

The Unit itself is a self contained video camera system. Camera, AA Batteries and SD Card are contained in 1 water proof unit. It also has a Mini USB and AV Out ports and comes with related cables. It can take up to a 2Gig SD Card and can record 640×480 30frames per second video for about 1 hour of recording. The Camera also has a built in microphone. 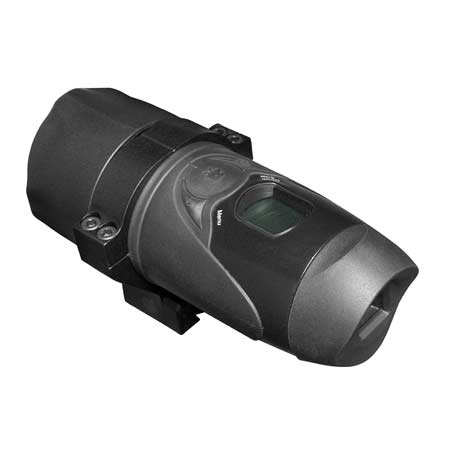 The RAP4 LWSC can mount to any 20mm rail system. Rap4 also includes a universal barrel mount kit, for other applications. The unit can be physically rotated in the mount to record at the proper angle, or you can rotate the video later in your favorite video editing program.

The cameras controls are simple to use. But for initial setup I did need to reference the manual, but that holds true for me for most multi-function devices with limited buttons. When hooked up via Mini USB to your computer, the camera acts as an external storage device, giving you direct access to your avi files.

The video format this records in is avi (for lack of a more detailed explanation), so it should be readable/editable by numerous systems/software.

I had the good fortune that I was in Las Vegas this year and had passes to Shotshow 2008. Unfortunately I only had 4 hours to run through the show. It is estimated that the show covers over 25 miles if you walked each and every aisle. My main focus was on seeing the new Classic Army releases at the Spartan Imports booth. The buzzkill to all that was, U.S. Customs delayed releasing all the new CA items and they never made it to the Shotshow this year ;( But fortunately there was lots to see.

A quick preface. For those of you who do not know. Shotshow is the largest firearms trade show in the U.S. To attend you must be affiliated in the firearms industry. For more info on Shot, please go to their website. http://www.shotshow.com

I’ll be splitting up the news to Airsoft and Real Steel since in some cases there is crossover and it could get confusing. Please keep in mind, I only say a portion of the show, so if things are not reported on in this report, it doesn’t mean they didn’t exist at the show. Just means I didn’t have time to see.

Spartan Imports / Classic Army – Let’s get the bad news out of the way. As mentioned above all anticipated new Classic Army items were held up by U.S. Customs and did not make it to the Shotshow in Las Vegas. But, hopefully will have products in hand sometime next week for pictures and brief reviews.

Magpul – Magpul made an impressive showing this year. I was able to speak 1 on 1 with Sam Lam, the head of Magpul airsoft, and was able to get a few interesting bits of news.

Just ran across this video. Thought everything sounded familiar 😉

That is me and Emory from Spartan Imports, talking with Sam Lam who runs the Magpul Professional Training Systems (airsoft) division, on new upcoming products.

Some well shot videos of Shot 2008, by our pal the Milspec Monkey.